In 2002, Ernst & Young Entrepreneur-of-the-Year Semi-Finalist and bestselling author Brent Sampson founded Outskirts Press. It was incorporated in Denver, Colorado in October of 2003 as a privately held, family-owned S-Corp.

The years between 2004 and 2006 marked a growth rate in excess of 1,500%, an accomplishment that was recognized in July 2007 by The Denver Business Journal when Outskirts Press was honored to be the 3rd fastest-growing privately held company (in any industry) in Colorado.

In 2008 The Denver Business Journal once again recognized Outskirts Press as the fastest-growing publisher, and in fact, the fastest-growing privately held small-to-medium sized company in Colorado (in any industry), boasting growth of over 500% for the previous three years.

In 2009 Outskirts Press published its 5,000th title and became the only self-publishing company to appear on the 2009 Inc Magazine Fast 500 list of fastest-growing privately held companies in America.

In 2010, 2011, and 2012, Outskirts Press repeated its appearance on the Inc. 5000 list three more times, and became the only self-publishing company to ever appear on the list of 5,000 fastest growing businesses in America four years in a row.

Ten short years after its incorporation in 2003, 2013 was a celebratory and banner year for Outskirts Press, and heralded the maturation of an industry success story. Outskirts Press published more books in calendar year 2013 than in its first five years combined, and, in fact, more books in a single year than ever before, a feat that was duplicated again in 2015.

In 2016, the All-New Outskirts Press unveiled all-new book publishing packages. What once was the "gem of custom book publishing" with packages like the Diamond, Ruby, Sapphire, Emerald, and Pearl has now become the only A+ rated and #1-rated self-publishing company according to the Better Business Bureau and Top Consumer Reviews, respectively. We provide our clients with the most flexibility anywhere, with more options, more free inclusions, and a wide array of full-service offerings. By the end of 2019, nearly 25,000 different editions (ranging from paperbacks, hardbacks, ebooks, and audiobooks) from thousands upon thousands of authors just like you were for sale from approximately 25,000 sales channels around the world.

Now, more than ever, writers are recognizing the value of high-quality production, superior customer service, and the continued necessity of hard-copy books to differentiate their contributions to the literary world from the mass of unfiltered, unprofessional electronic-only books.

Your first point of contact, these industry experts help you select the publishing package and options best suited to your goals and budget. Pictured: Tina R.

Always in your corner, these publishing advocates take care of all the production details for you, and work with you to resolve technicalities. Pictured: Lisa J.

Title production supervisors, production managers, department heads - these are the people making sure our quality and service is top-notch. Pictured: Cheri R.

Being an Outskirts Press Affiliate is as easy as...

The Outskirts Press
Best Book of the Year Awards

Will you be our next award-winning author? 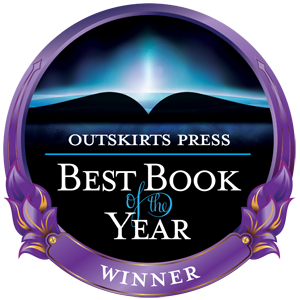 You could win the $1,500 Grand Prize just for publishing with Outskirts Press

No promotion code is necessary. Simply order one of our amazing One-Click publishing suites and your book will automatically be eligible for the "Best Book of the Year" Award contest for the year it is published. The talented author of the best book we publish each year will win the $1,500 Grand Prize plus a lot of bragging rights!

Outskirts Press is the only place where...

Since you are going to be publishing anyway, your book might as well be in the running for the "Best Book of the Year Award" and $1,500 at the same time, right? Use your $1500 credit to publish your next book with Outskirts Press, or use it to purchase optional marketing services or products to promote your award-winning book, or just to buy a whole bunch of copies. It's entirely up to you!

See what our authors are saying about their self-publishing experience

From the beginning, and throughout the process of publishing my first book, I felt that I was in the hands of a pro. Dana always took the time to answer my questions in detail and swiftly, and if she didn't have 100% confidence, she researched the question and got back to me. I was very pleased with her and I am also thankful that I was paired with her as an Author Rep.


— David Matityahu Ben Avraham, author of There's No Such Thing as Magic Blood

The entire Outskirts Press team working with me, are exceptional...

Bridget, as well as the entire Outskirts Press team working with me, are exceptional. They held my hand through the entire process in addition to providing me with welcomed support and encouragement. I am looking forward to our next project together. I have recommended Outskirts Press to several freelance authors in my area. Thank you for making a potentially hectic journey so enjoyable and so satisfying.


— Paneque y Diaz, author of More Than What They Seemed

I will highly recommend Outskirts Press to my friends and associates…

My representative Jamie was always extremely professional and helpful during the entire process of my book publication. She always responded very quickly to requests and was always helpful throughout the entire process. She is a great role model and a great asset to the Outskirts Press family. I will highly recommend Outskirts Press to my friends and associates and also look forward to doing more business in the future. I am extremely pleased with my book publication and consider this a major milestone in my life . Thank you all very much...

I'm delighted with the outcome...

I was very happy with my author rep's responses to me. She did a superb job of answering my questions and helping me through the editing process. She was always available when I needed her. I'm delighted with the outcome--my book looks good and it's selling! Thank you.


— Kathleen O'Brien, author of Reclaim Your Right To Grow Old

I have been very pleased with the way OP helped...

I have been very pleased with the way OP helped and handled the publishing of both my books. Tina was my first great agent and Dana continued that care and concern. I would definitely use this company again and recommend them to all who are now asking "How can I get published? Please keep up the good work and the integrity you have with your company. May God bless you all for blessing your clients the way you do!

A great experience with Outskirts Press...

A great experience with Outskirts Press. I learned a lot in this process. I will do it all over again. Thank you so much.


— Esther A. Ota, author of Children: My Heritage - A Testimony

Her guidance helped turn my dream into a reality…

The one-on-one with Lisa was great. Especially the phone call picking out styles, font, cover template etc. She even got a vote on the color. I so wanted to have my daughter's painting as the art work on the cover and she gave me a way to do that. Her guidance helped turn my dream into a reality and sometimes it is still hard to believe until I look at my book. Thank you.


— Nancy L. Regas, author of The Art of Being a School Counselor

What a blockbuster learning experience I had being a part of self publishing with Outskirts Press! I felt empowered to the next challenge by both Allison and Dana. Their professional guidance and clear instructions when I needed help was crucial to feeling I could tackle the next step. I look forward to the experience with the marketing team. Thanks, Outskirts Press.

Outskirts Press changed my life for the better...

Outskirts Press changed my life for the better. They turned my adoption memoir into a book that is not only beautiful to look at, it is pleasurable to read, easy to purchase online, and in less than a month already has had a profound impact on many people. A truly amazing company with a heart. Deepest gratitude!


— Paul Kimball, author of We Are All Human Beings

Everyone worked hard to create an awesome final product…

The Outskirts Press team was helpful, attentive, prompt and detail oriented during the publishing process. It really felt like a team effort, and everyone worked hard to create an awesome final product that was my fully published book!


— Eric B, author of Realm of the Invader

Thanks for a great job...

Having just published my eighth book with Outskirts Press, I can attest to it being a great experience, and I look forward to publishing number nine. Thanks for a great job.


— James A. Hunter, author of Soft And Gentle 8

I would like to thank everyone at Outskirts Press...